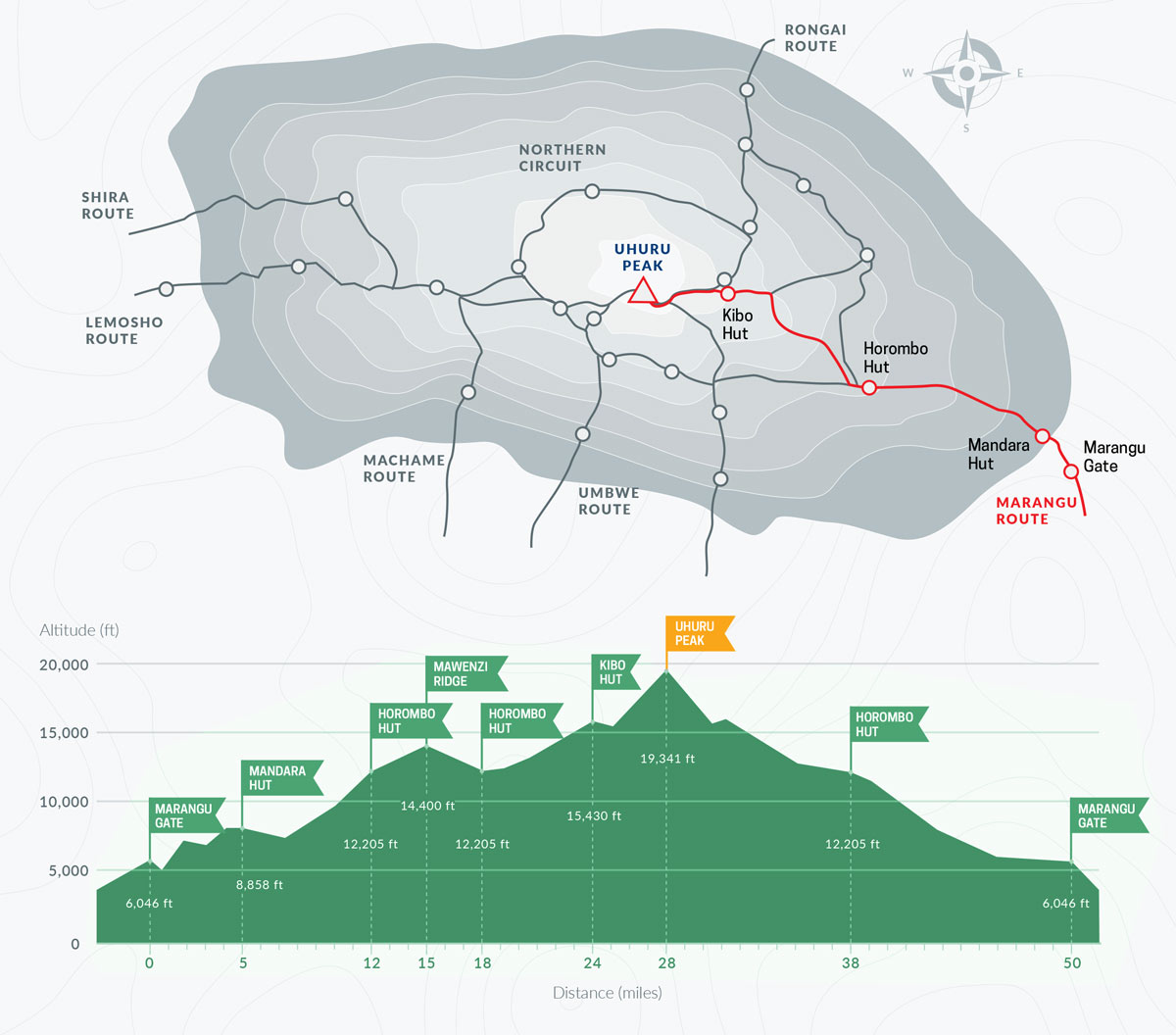 This 5 Days Marangu route itinerary and package for climbing Mount Kilimanjaro will take you to the roof of Africa, the Uhuru peak. You will traverse different vegetation and climatic zones as you climb, spot some animals, birds over scenic trails, and have stunning views of the peaks of Kilimanjaro. It is an amazing adventure of exploring different terrains and putting your thirst for adventure to the top. It is worth noting that the Marangu route is one of the shortest trails to the summit of Mount Kilimanjaro. The 5 days Marangu route package is one of the cheapest and most affordable ways to climb Mount Kilimanjaro, as it takes shorter days and you stay in A-shaped, dormitory-style cabins instead of tents. This route can also be offered as a 6-day itinerary option with an extra day for better acclimatization.

Below are the prices for the Marangu Route Package with costs starting from $1,130 per person sharing for a group of 10 people. Contact us for a cost for more than 10 people.

Marangu Route, the only route to strictly use huts instead of tents as a form of accommodation, is also popularly known as the Coca Cola route. it is one of the most popular routes on the slopes of Mount Kilimanjaro.

Summit night via the Marangu Route begins from Kibo Hut which is a steep gradient that goes through Gilman’s Point to reach the summit at Uhuru Peak. Since it is short and steep, it becomes a challenging climb because it also offers little time to climb hence not enough time for acclimatization. This also happens to be the only route where the ascent and descent route is the same, that is why it is more crowded and receives high traffic of climbers.

The 5-day Marangu Route records a low summit success rate of about 50%! Since climbers tend to rush to reach the summit. Skipping one extra acclimatization day can significantly lower the average success rate of 50%.

When you arrive at Kilimanjaro International Airport, you will be met and transferred to your hotel for dinner and overnight as you prepare for the next day. Your head guide will meet you for your briefing, gear check, and arrange for you to hire or rent any gear or mountain equipment you may need.

You begin your 5 day Marangu route tour by driving to the Mount Kilimanjaro National Park Gate from the lodge or hotel in Moshi/Arusha. When you arrive at the park gate, check-in at the office and make final preparations to begin the climb. We now exit the park gate and rise through the rainforest on a cleared ridge track. The forest, which is shrouded in mist and dripping with moss beards, is also home to the majority of Kilimanjaro’s species of birds and resident animals. Our first night will be spent at Mandara Hut, a collection of wooden A-frame houses nestled in a woodland clearing. Water is pumped in from springs above the camp, and flush facilities are located behind the main cabin.

The trail from Mandara hut continues through a short tract of woodland before emerging onto the transition zone between rain forest and moorland, skirting the base of the Maundi Crater. We will arrive at the Horombo Hut after about 6 hours from here, where we will spend the night. Make the most of the available hot washing water.

We continue our climb into the Alpine dry zone, passing the final source of water at 4130 meters. We’ll fill up our water bottles with enough water to last us till we return to Horombo hut in two nights. The summit is currently only 1195 meters away from Kibo Hut. We’ll start our summit ascent tonight, so we’ll go to bed around 18:30 p.m. and try to get as much sleep as we can.

We’ll get up around 23:30 p.m. and head out into the night after some tea and snacks. It will be a challenging push to the summit. The hike begins with a rocky road that leads to Hans Meyer Point (5250m). The path then zigzags up the crater rim to Gillman’s point (5681m). This portion has a lot of scree and is fairly steep.

Snow could be encountered all the way up to Uhuru peak (5895m), Africa’s highest point, from Gillman’s Point. The weather on the summit will dictate how much time we have to spend photographing before the three-hour descent back to Kibo Hut.

We grab all of the stuff we left behind for the ascent and proceed down to Horombo Hut after a short rest (3 hours). Later that evening, we have a mountain dinner and a well-deserved rest, replete with recollections of the day’s accomplishments.

Day 5 of our Marangu route itinerary marks the final day of our climb. We continue our journey of descending Mount Kilimanjaro (6 hours) down to the Marangu Gate, passing the Mandara Hut on the way. This is also where our summit certificates will be handed out. At Marangu Gate, a van will be waiting to transport you back to your hotel or airport.

We needed a climb that did not require us to use tents for mountaineering accommodation so we settled for the Marangu route. Also, the fact that it is short, was perfect for us as we did not have that much time on our hands. The pricing for the Marangu route was reasonable too as it is the cheapest route on Mount Kilimanjaro. We loved the challenge, the guides were amazing and helpful and we do recommend this route but with proper acclimatization methods, it is a success.

Climb Kilimanjaro via the Marangu Route

Be the first to review “5 Days Marangu Route” Cancel reply