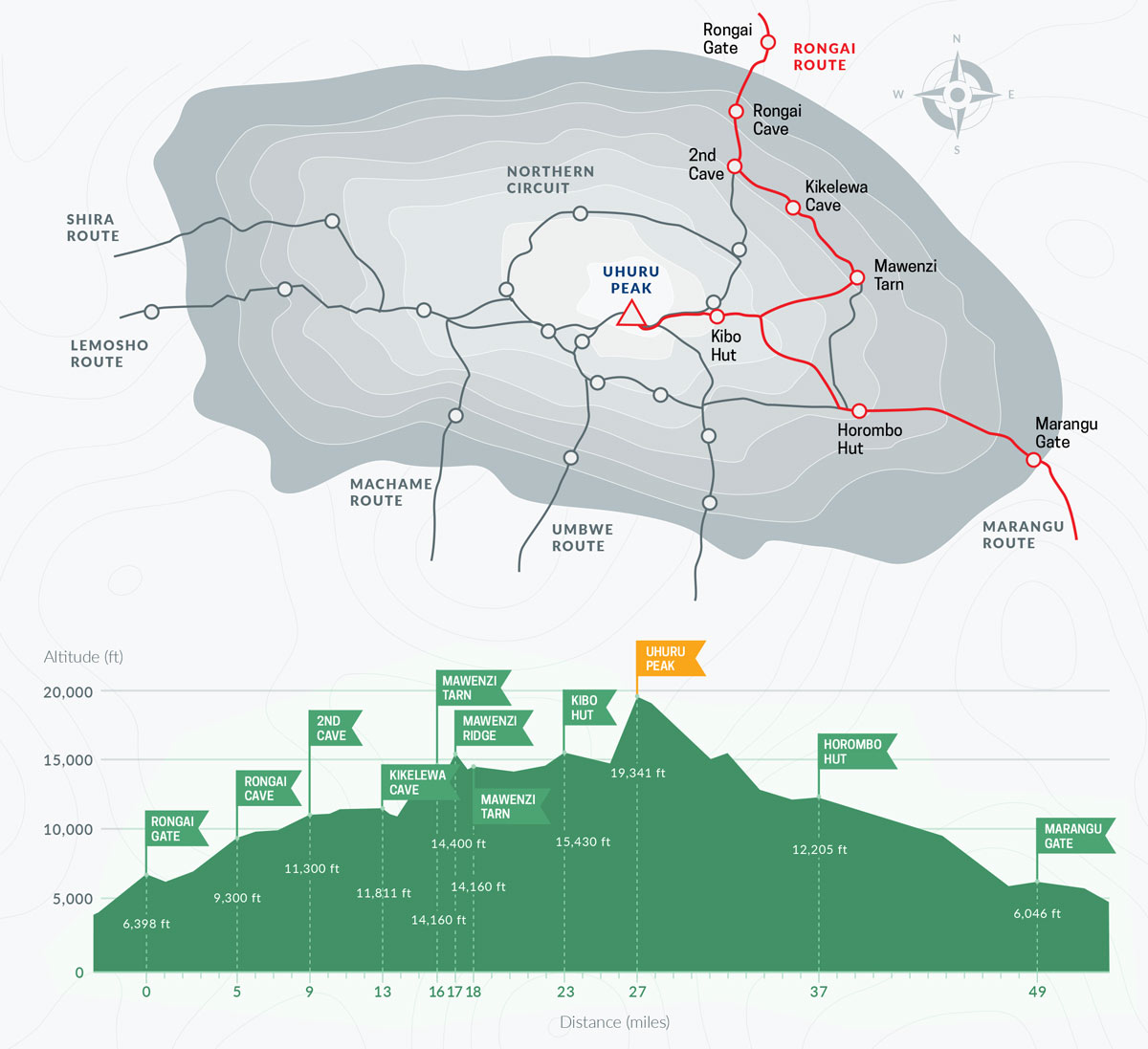 Below are the costs of the 6 day Rongai route package, starting from $1,450 per person sharing for a group of 10 people.

The Rongai Route is a remote and quiet route that receives less traffic from climbers but gives climbers a sense of wilderness adventure with a higher chance of spotting big game wildlife along the way. it has a poor acclimatization profile because its gradient is almost flat, therefore it does not follow the proper acclimatization rule of “climb high. sleep low”.

it is a great route to use all year round since it does receive less moisture and precipitation because this side of the mountain is shielded from the rain giving you clearer views of the peak as you climb.

The Rongai route is among the easier routes for climbing Kilimanjaro. The route approaches Mount Kilimanjaro from the northern side then descending the mountain follows a different trail, the Marangu trail. Summit night from Kibo Hut is steep and uses the same trail used by the Marangu route which passes Gilman’s Point to the summit, Uhuru Peak.

There are several options for this route; the one described is the longer variation going through the Mawenzi Tarn.

The summit success rates for the 6 Days Rongai Route is a lower 65% campared to a higher 80% for the longer, 7-day route variation of the Rongai Route.

When you arrive at Kilimanjaro International Airport, you will be met and transferred to your hotel for dinner and overnight as you prepare for the next day. Your head guide will meet you for your briefing, gear check and arrange for you to hire or rent any gear or mountain equipment you may need.

We will register at the Marangu Park Gate and then transport to the Rongai trailhead (about 2 12 hours) to begin our 6 days Rongai Route trek. Before you start your walk from Nale Moru village, we’ll meet our porters. The narrow twisting route winds its way through corn fields before slowly ascending into a pine woodland. The first night’s camp is in First Cave, which is around 2,600 meters above sea level.

The route ascends to Kibo, passing through Second Cave (3450m) on the way and arriving at Kikelewa Cave at 3600 meters. From here, the vistas begin to open up, and you can see for yourself just how massive Kilimanjaro mountain is. We’ll spend the night at Third Cave Camp (Kikelewa Caves).

A short but steep ascent over grassy hills is rewarded with spectacular panoramic vistas and a strong sense of nature. We leave the foliage behind just before arriving to Mawenzi Tarn (4330 m), which is magnificently positioned in a cirque right underneath Mawenzi’s towering spires. As an assist to acclimatization, the afternoon will be free to rest or explore the local region.

Between Mawenzi and Kibo, we traverse the lunar desert of the ‘Saddle’ to reach Kibo campground (4750m) at the bottom of the Kibo crater rim. The rest of the day will be spent recuperating in preparation for tomorrow’s last ascent!

We’ll get up at 23.30 a.m. and have tea and biscuits. We’ll begin our ascent. This is when things start to become rough. The hike begins with a rough walk that leads to the Hans Meyer Cave (5150m). We then zigzag along the crater rim to Gillman’s point (5681m). This is the most difficult stretch of the path since it is quite steep and has a lot of stone scree. Snow might be encountered all the way up to Uhuru Peak (5895m), Africa’s highest point, from Gillman’s Point. Exhilaration and fulfillment abound – you’ve accomplished your goal!

The weather on the summit will dictate how long we can spend photographing before returning to Kibo Hut and then Horombo, where we will spend the night. Later that evening, we have our final meal on the mountain (with soft drinks and beer available for purchase at the camp office) and a well-deserved rest.

We’ll continue our descent after breakfast, passing Mandara Hut on our way to the Marangu Gate, where you’ll get your summit certificates. You will be met by a car that will transport you back to the hotel. This day marks the end of your 6 day Rongai Route package.

My boyfriend and I recently completed a six-day trek on the Rongai Route with mountkilimanjaroroutes.com, and we couldn’t be happier. We would highly recommend the organization.

Again, I feel very secure and confident in suggesting mountkilimanjaroroutes.com to anyone. We chose them based on a suggestion from a friend, and we will continue to do so in the future.

Be the first to review “6 Days Rongai Route” Cancel reply