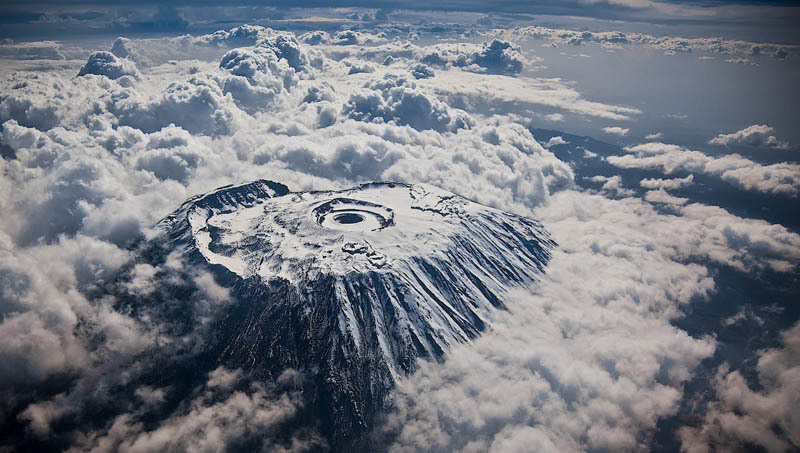 Kilimanjaro lies on a tectonic line intersection 80km. east of the tectonically active Rift Valley. The activity which created this stratovolcano dates back less than a million years and the central ash pit on Kibo, the highest volcanic centre, maybe only several hundred years old. Steam and sulphur fumaroles here are indicative of residual activity.

Shira and Mawenzi were two other areas of volcanic activity. Both became inactive before Kibo. The Shira volcanic cone collapsed leaving the Shira Ridge as part of its Caldera Rim. Mawenzi has been heavily eroded to leave a mass of steep-sided ridges and summits, particularly dramatic on the infrequently-seen eastern side. Kibo is the best-preserved centre; it has three concentric craters and the outer crater rim rises to Uhuru Point – the chief summit. The middle, Reusch crater contains the main fumaroles and in its centre the 130m. deep and 400m. wide Ash Pit. The outer crater has been breached by lava flows in several places, the most dramatic of these being the Western Breach.

The ash and lava covered slopes of Kibo are mainly gentle-angled from the steep, glaciated precipices which defend its southern and south-western flanks. The impressive rock walls on Kilimanjaro and Mawenzi are generally composed of lavas and ashes. Deep gorges (barrancos) have been carved into the soft rocks and ashes of Kilimanjaro. The most impressive of these is the Great Barranco below the Western Breach and the two Barrancos on the east side of Mawenzi. Numerous parasitic cones extend east-west across Kilimanjaro; some are located near the Mandara Hut (Maundi Crater offers a fine viewpoint), while others lie just north of the Shira Route. At one stage most of the summit of Kilimanjaro was covered by an ice cap, probably more than 100 metres deep. Glaciers extended well down the mountain forming moraine ridges, clearly visible now on the southern flanks down to about 4000m. At present only a small fraction of the glacial cover remains. The remnants of the ice cap can be seen as the spectacular ice cliffs of the Northern Icefields and Southern Icefields, and the longest glaciers are found on the precipitous southern and south-western flanks. If the present rate of the recession continues the majority of the glaciers on Kilimanjaro could vanish altogether in the next 20 years.