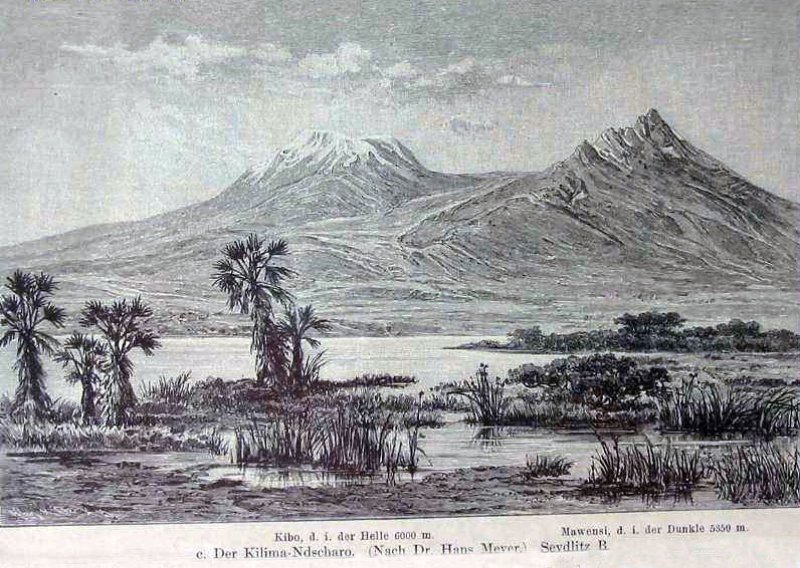 It is unknown where the name Kilimanjaro originates, but a number of theories exist.

European explorers had adopted the name by 1860 and reported that it was its Swahili name ]with Kilimanjaro breaking into Kilima (Swahili for “hill, little mountain”) and Njaro whose supposed origin varies according to the theories—according to some it’s an ancient Kiswahili Swahili word for white or for shining, or for the non-Swahili origin, a word from the Kichagga language, the word jaro meaning “caravan”. The problem with all these is that they can’t explain why the diminutive kilima is used instead of the proper word for mountain, mlima. The name might be a local joke, referring to the “little hill of the Njaro” being the biggest mountain on the African continent, since this is a nearby town, and guides recount that it is the Hill of the Njaro people. A different approach is to assume that it comes from the Kichagga kilmanare or kileajao meaning “which defeats the bird/leopard/caravan”. However, this theory cannot explain the fact that Kilimanjaro was never used in Kichagga before in Europe in the mid-1800s.

In the 1880s, the mountain, at that time spelt Kilima-Ndscharo in German following the Swahili name components, became a part of German East Africa after Karl Petershad persuaded local chiefs to sign treaties. In 1889 the peak of Kibo was named “Kaiser-Wilhelm-Spitze” (“Kaiser Wilhelm peak”) by Hans Meyer, on the first ascent to the summit on 5 October 1889. That name was used until 1918, when after World War I the German colonies were handed over to the British empire. When British-administered Tanganyika gained its independence in 1961, the peak was named “Uhurupeak”, meaning “Freedom peak” in Swahili.

The Ki- prefix in Swahili has several underlying meanings. The old Ka- diminutive noun prefix (found now only as Kadogo – a small degree), merged with the Ki class. One of its meanings was to also describe something unique of its kind: Kilima, a single peak, as opposed to Mlima, which would better describe a mountain range or undulating country. Several other mountains also bear this prefix, such as Kilima Mbogo (Buffalo Mountain), just north of Nairobi in Kenya.

It is also claimed that the Kilimanjaro name is a combination of two Chagga words, Kilemia, ngaruo meaning difficult to climb. The Chagga are native agriculturalists on the slopes of Kilimanjaro. The mountain has three peaks, Kibo, Mawenzi and Shira. The names are also Chagga words, Kibo from Kifwo in Chagga which means present, Mawenzi from Kimawenje meaning broken and Shira meaning war as it was a platform for fighting with the Maasai. The names predate the sighting of the mountain by the Germans explorers.