Kilimanjaro’s Machame route, commonly known as the “Whiskey” path, is the most popular. Machame’s allure stems from its breathtaking scenery. However, because of its limited length, the track is regarded as demanding, steep, and strenuous. As a result, this path is best suited for people who are more adventurous or have prior high-altitude, trekking, or backpacking expertise.

Starting with a short drive from Moshi to Machame Gate, the route approaches Mount Kilimanjaro from the south. Hikers will follow the trail to Shira Plateau via the rain forest zone. Many of Kilimanjaro’s paths come together at this point. The route then heads east and follows the Southern Circuit way beneath Kilimanjaro’s Southern Ice Field before reaching the summit from Barafu. The Mweka path is used to descend.

Difficulty (1-10):  Mount Kilimanjaro Routes ranks the Machame route at a 7/10.  Considered more difficult than Marangu, hence the nickname “Whiskey Route”.  Suitable for trekkers who are a little more adventurous.

Scenery:  Although Machame is a busy route, the scenery is beautiful and varies since the ascent and descent routes are different.

Success Rate:  The success rate of Machame route is much higher than Marangu, but is still considerably lower than other routes, especially if you opt for the 6-day trek.

Traffic:  Due to its popularity, Machame is now the busiest route on the mountain.  If you are looking for peace and quiet, we do not recommend using this route.

Comfort:  You will sleep in tents on the Machame route.  Your comfort is really determined by your level of tolerance for camping.

The Machame route is one of our most highly recommended routes to climb Kilimanjaro as it offers great acclimatisation, allowing the climber to “walk high, sleep low”, and as a result enjoys one of the highest summit success rate of all the routes to climb Mt Kilimanjaro. It goes by the nickname of “The Whisky Route” although no whisky is available!

The Machame route approaches from the southwest, passing through Kilimanjaro’s five diverse climatic zones with stunning views to the west across the Shira Plateau where it joins the Lemosho/Shira route on day 3. It then continues on to the magnificent Lava Tower, followed by the Great Barranco Wall and Kilimanjaro’s Southern Icefield.

Some people are concerned about the short scramble up the Great Barranco Wall, but this really is not that tricky and you will be helped by your guide every step of the way. One stride around a rock outcrop is the most precarious part you will experience. Thousands of climbers safely travel this route each year, let alone the Kilimanjaro porters carrying heavy loads.

Owing to its high success rate the Machame route can be busy, but we ensure we hit the trail early to avoid the crowds. We also ensure that our porter team arrive into the designated campsites early so that your tent will be set up and ready for your arrival, together with a nice hot drink prepared by our team cook.

Although you can climb Kilimanjaro over 6 days via the Machame route we recommend taking 7 days. The reason for this is that it offers much better acclimatisation and allows the pre-summit day to be split into two which means that you have two shorter days trekking prior to your summit ascent. This really helps and has proved a great success and a more enjoyable way to climb Mount Kilimanjaro.

Open group climbs are available on this route. Check out availability

How much does it cost to climb the Kilimanjaro Machame Route?

As the Machame Route map outlines below, the climb begins in the lush, rich montane rainforest of Kilimanjaro. The trees diminish as the trail approaches the Shira Plateau, and the heather zone is replaced by low scrub. The trail then rises to the top of Lava Tower, a volcanic plug, before lowering and looping below the South Icefield. Climbers are treated to spectacular views as they make their way halfway around the peak.

From the east, we make our way to the peak through countless switchbacks over increasingly loose gravel until we reach the crater rim at a point known as Stella Point. Then it’s another hour of reasonably level terrain to Uhuru Peak, Mount Kilimanjaro’s summit. The Mweka track is followed on the fast descent.

From gate to gate, the Machame Route is around 62 kilometers/37 miles. 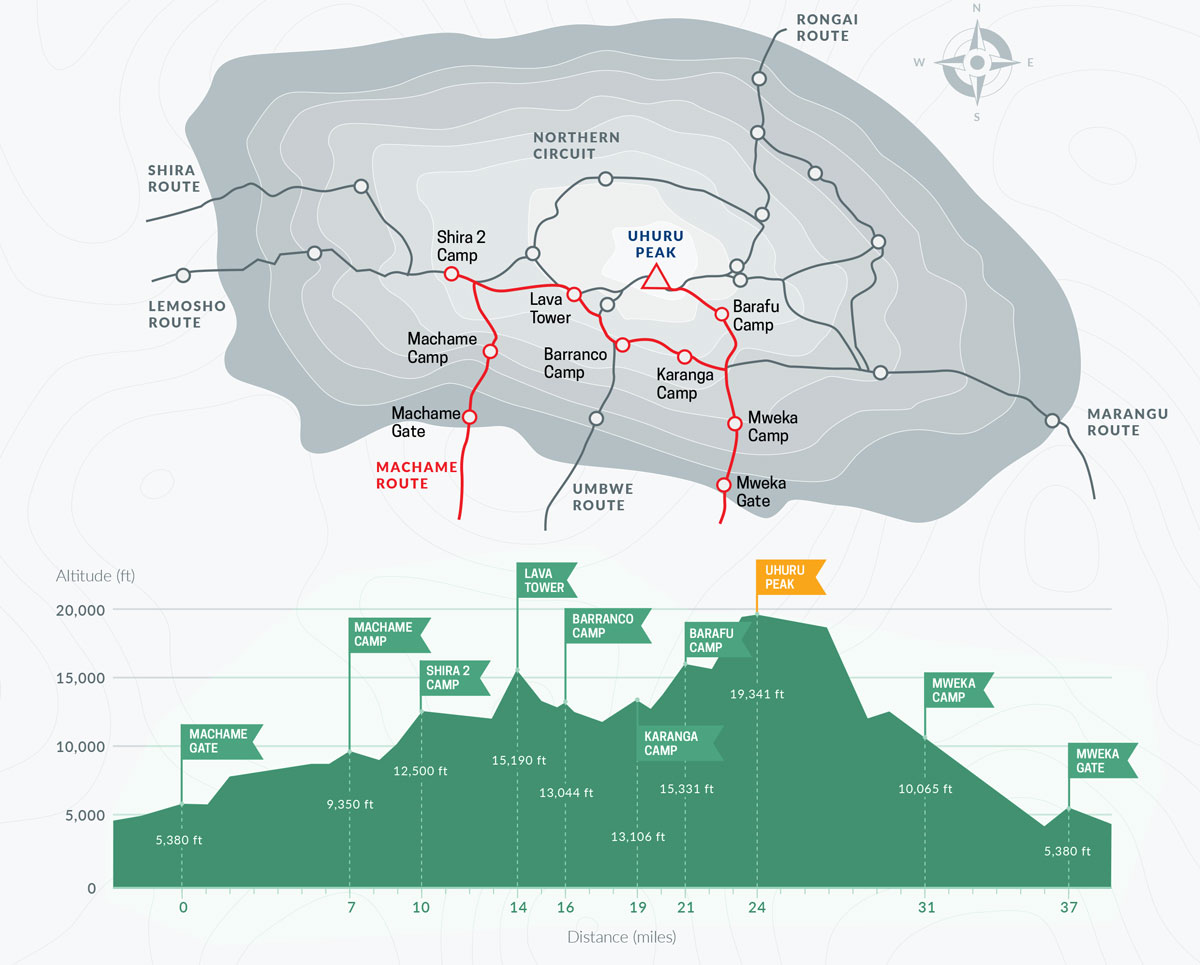 Drive from the Hotel to Machame Gate for registration. Our porters prepare and pack the supplies and luggage before we start our ascent along the forest trail  through rain forest on a winding trail up a ridge to Machame Camp where we will camp overnight.

Today we leave the rainforest behind, and continue climbing up into the moorland/low alpine zone to Shira camp.  The scenery is much sparser and barren now, with a few small flowers and also the rather unusual Giant Lobelias dotted along the way.

This will be our toughest day so far and we will start to feel the symptoms of altitude as the air gets thinner as we reach higher altitude.  We will climb up to 4600m to Lava Tower and stop and take a short rest and lunch there to acclimatise. Climbing up to this higher altitude before descending back down to our overnight camp at lower altitude will  help your body prepare for summit day.  There will be plenty of opportunities on our descent to take some photos of the Western Breach and Breach Wall. The camp is situated in a valley below the Breach and Great Barranco Wall, a great spot to watch the sun go down.

Today’s adventure begins with a quick but enjoyable climb to the summit of the Great Barranco Wall. We’re far above the clouds now, with breathtaking views of the surrounding countryside. We next climb through scree hills to the Karanga Valley (3930m), which lies beneath the Heim, Kersten, and Decken Glaciers’ icefalls. Our trail ascends to Barafu Camp (4600m) after rising out of the Karanga Valley.

At 23:30, you’ll be roused up with a cup of tea and some cookies. Between the Rebman and Ratzel glaciers, we begin our climb to the top. We’ll take a north-westerly route to Stella Point on the crater rim, ascending via thick scree. This is the toughest portion of the journey, both psychologically and physically. We’ll stop for a short break at Stella Point (5732m) and be rewarded with one of the most spectacular sunrises you’ll ever witness. We will have reached Mount Kilimanjaro’s and Africa’s highest peak, Uhuru Peak (5895m).

At these heights, it can get extremely chilly at night, but by the end of the trekking day, it will be rather warm. We descend to the Mweka Hut camp site via Barafu for lunch after reaching the peak. The loose gravel on the way down to Mweka Camp will require trekking poles (3100m). We’ll have our final meal on the mountain later that evening, followed by a well-deserved rest.

We’ll get your summit certificates at the Mweka Park Gate. It might be damp and muddy at lower levels. Walking poles and gaiters will be useful. Shorts and tees are appropriate attire (keep rain gear and warmer clothing handy).

From your Hotel, you will drive to the Machame Gate to register. Last chance to use the toilets before you start your days trek through rain forest. Following the 4WD track onto a pedestrian track stopping for lunch on the route to the Machame camp, where you will stay overnight.

Starting today from Machame camp your trek will take you up to Shira 1 campsite. The walk today will see the vegetation lessen and the paths getting much dustier as your climb gets steeper. With rocks and boulders to overcome before you hit Shira plateau.

Today’s trek will take you up to 4600m at Lava Tower and effects of altitude sickness may be felt as you reach your highest point so far. This will help with acclimatisation, in preparation for summit day. Starting today with a gradual ascent to Lava tower where you will stop for lunch before descending into the Barranco Valley and onto Barranco campsite. Where you will have views of Kibo, Western Breach and Heim Glacier for your efforts today.

Today will start after breakfast with a fun scramble, to the top of the Great Barranco Wall. At this point you will be well above the cloud level with amazing views across the surrounding area. Even though we will climb to a higher altitude during the day, we will descend back down to the same altitude from which we started this morning to help us acclimatise.  We will spend the night in the slightly cooler air of the  Karanga Valley (3930m) beneath the icefalls of the Heim, Kersten and Decken Glaciers.

We leave Karanga campsite behind to meet the junction connecting with the Mweka descent Trail. From here we continue up to the Barafu Hut. You have now completed the Southern Circuit, which offers views of the summit from many different angles. At camp, we can rest, enjoy dinner, and prepare for the summit day. The two peaks of Mawenzi and Kibo are to be clearly seen from this position.

Just before midnight you will be woken with a warm drink and snack before you set off for the summit. The trek to the summit will take you between the Rebman and Ratzel glaciers. Heading in a north-westerly direction through heavy scree towards Stella Point on the crater rim. The trek today will be the most mentally and physically challenging part of your journey to the Top of Africa. When you reach Stella Point (5732m), you will take a short rest and will be greeted with a sunrise you are never likely to see elsewhere. Another hour on, to Uhuru Peak (5895m) the highest point on Mount Kilimanjaro. Time to take that all important Summit Photo. From the summit, its down to the Mweka Hut camp site, stopping at Barafu for lunch. Then down through loose gravel to reach Mweka Camp (3100m) for the evening. Tonight will be your last dinner on the mountain.

Last day on the mountain will take you down to Mweka Park Gate to receive your summit certificates. Walking through cloud forest the track can get muddy, but you’re nearly at your journeys end. On the way look out for the Colobus monkeys chattering in the trees.

Depart for Kilimanjaro Airport. This signifies the end of your 7 day Machame Route trek.